Photos from Day One: San Francisco to Santa Cruz.

I rode 79.3 miles (by the official count; 82 by my odometer), up and over the Skyline ridge, ate lunch at San Gregorio State Beach, and took a lovely ride down 1 to Santa Cruz. Along the way I met some Sisters of Perpetual Indulgence and a woman carrying a memorial sign to Gary Stainback, who passed away from AIDS in 1996.

Day One is (for me) always one of the most difficult days on the Ride. Partly because of the climbing – there is more overall climbing on Day One than any other day (I think) – but mostly because you have to get up so darned EARLY. Cyclists need to be at the Cow Palace by 5-6am, and because I like to leave nothing to chance, I generally aim for 5am. Which means getting up around 4 or 4:30am. Nothing like getting up before dawn!

As with all my photo pages, click on the thumbnail to get the larger photo. 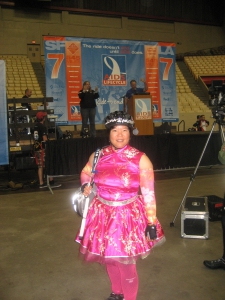 Me in my brand-new cheongsam-tutu in front of the stage at Opening Ceremonies. 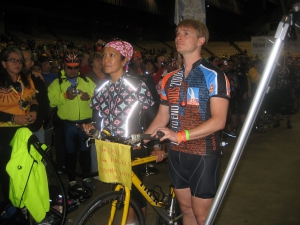 At the beginning of Opening Ceremonies, the Spirit Bike - an empty helmet and riderless bike - is brought forward to remind us of all those have been lost to HIV and AIDS. 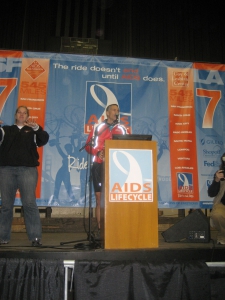 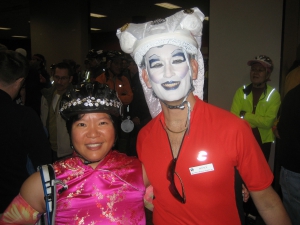 Me with a Sister of Perpetual Indulgence. They are a nonprofit gay/lesbian/ bisexual/transgender services organization HQ'd in San Francisco: see their website for more details. 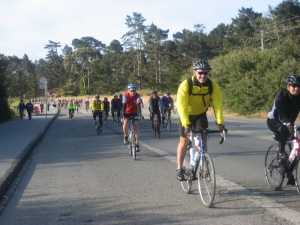 Riding out of the city.

Taiko drummers and the fabulous Ginger Brewlay, an HIV+ drag queen, awaited us at the top of Rte 92. 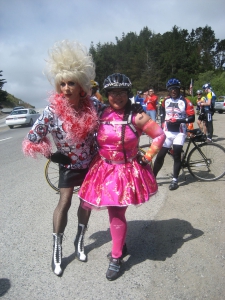 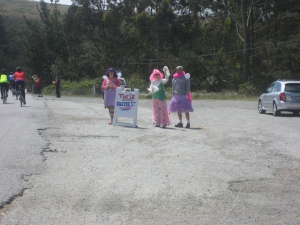 One rider's supporters dressed up to welcome him/her... 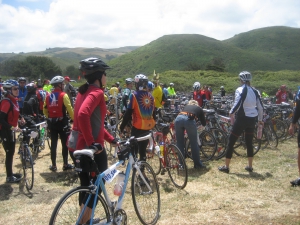 One of the rest stops. 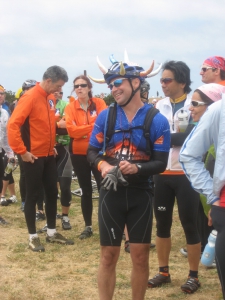 Riders often decorate their helmets. Here's someone with horns! 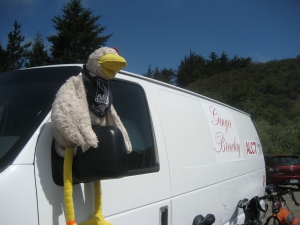 Chicken Lady (who has done nearly all the AIDS Rides in a rainbow skirt, with a chicken on his head) had a stroke this year and was unable to ride, but his chicken came along! 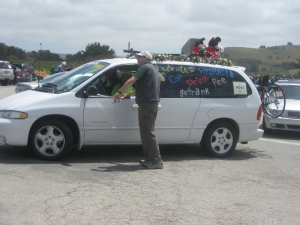 A sweep vehicle. They drive the route looking for cyclists in trouble, and pick up cyclists who for whatever reason (medical, mechanical) are unable to continue. 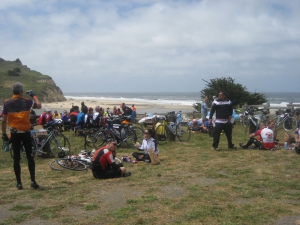 Lunch at San Gregorio State Beach. We pass through some of the most beautiful scenery in California on the Ride. 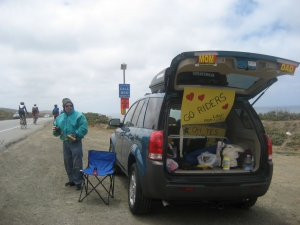 "Mom and Dad" are the parents of one of the riders, and come out to cheer on AIDS Lifecyclists every year from the side of the ride. They're one of the most beloved sights (after Ginger, of course) on the Ride. 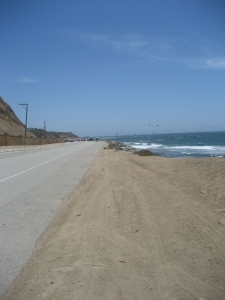 The coastline bicycling along Route 1. In the background (look at the large photo) you can barely make out parasailers' sails. 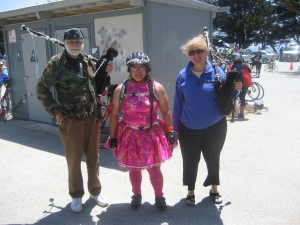 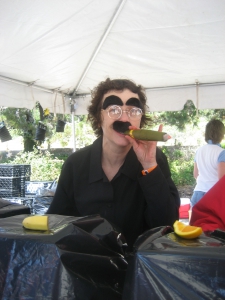 And a roadie telling me, "Sometimes a cigar is just a cigar." 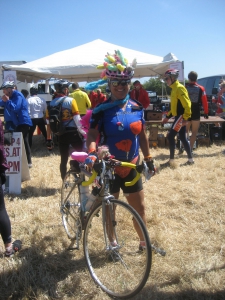 Another cyclist with a decorated helmet. These are colored condoms stuffed with Styrofoam. Safe helmets! 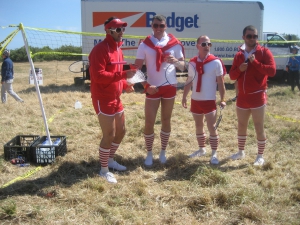 The BAD-minton roadies at Rest Stop 4. 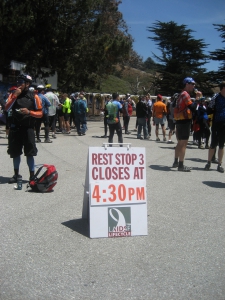 Each rest stop has a closure time to ensure that people can complete the route by the route closure time (7pm daily). If you arrive at a rest stop after closing time, you get swept into camp. 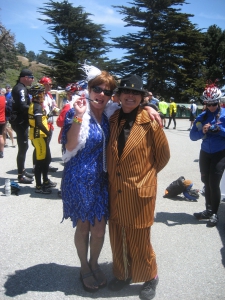 More Rest Stop 3 roadies. Each of the rest stops does a different theme each day, and the rest stop roadies dress up accordingly. 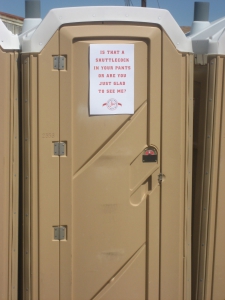 Zoom in on the larger version. Rest Stop 4, which annually is the wildest, funniest rest stop, did a "Badminton" theme and put signs on all the portapotties! 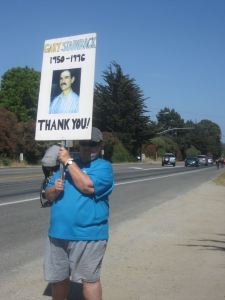 A woman holding a sign thanking the riders and remembering a loved one who died of AIDS in 1996. 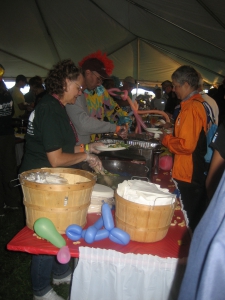 The food lines. Fifteen minutes can make a world of difference in how long you have to wait for food. I got up at 4:30am so I could get in line for food at 4:45am - by 5am the lines were already 15-20 minutes long. 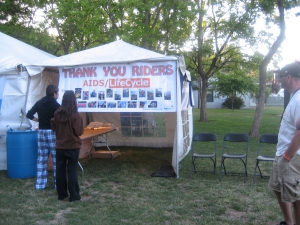 The dedication tent, sponsored by FedEx.