Day Seven saw me in my loveliest outfit of all, a strapless confection of white dupioni silk, gold organza, and lots of peacock feathers – over 1000 green and blue body feathers in the top, and 126 tail feathers in the bottom. It took me probably over 40 hours to design and sew this outfit, but it was worth every moment.

And, at the end of Day Seven, we rolled triumphantly into Los Angeles, at the VA Center…celebrating 7 days, 550 miles, and over $11.6 million raised for the San Francisco AIDS Foundation and the LA Gay & Lesbian Center!

Day Seven saw us journey the last leg, from Ventura to Los Angeles, a journey of 62 miles. Physically, it’s by far the easiest day, as it’s nearly all flat (coastal) and relatively short. (Day Five is forty-some miles, but has some serious hill climbing in that short distance.)

What a sense of victory as I entered the county, then the city of Los Angeles! I had not expected to be able to ride every single mile (as relatively undertrained as I was), yet here I was, rolling into Closing Ceremonies, having ridden every one of 550 miles. No problems, not even a single flat! 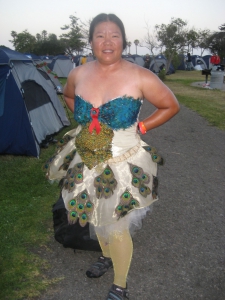 Saving the best for last: this was my best and most formal tutu, suitable for a tutu-ball. There are over 1000 feathers on the body - green and blue peacock body feathers - and 126 tail feathers on the metallic gold organza tutu. All hand-sewn! 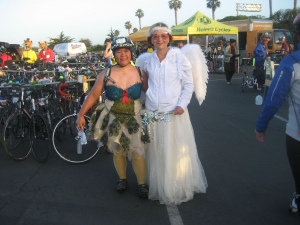 The angels in bike parking were watching over us every day...I finally got a shot with one of them! 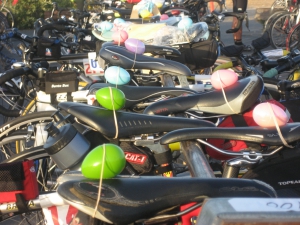 ...and we got to Bike Parking to discover that Chicken Lady, who had had a stroke that year and was not riding, had still left eggs on all our bikes! 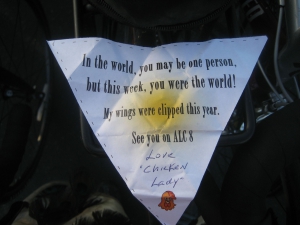 Chicken Lady's note (inside the eggs). It is always one of the highlights of the ride to get an egg and see the goodies (candies + note) inside. 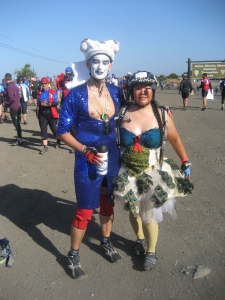 Me with a Sister of Perpetual Indulgence. 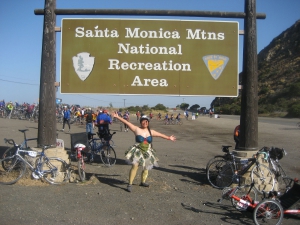 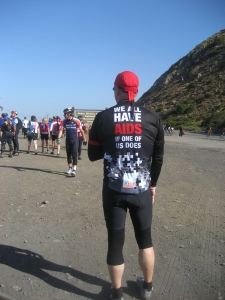 A Positive Pedaler (HIV+ rider) with a reminder of why we ride. 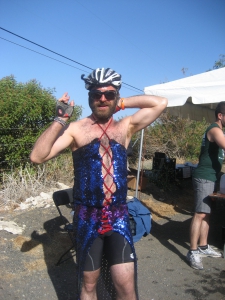 Another rider put on his most formal sequined dress for the occasion... 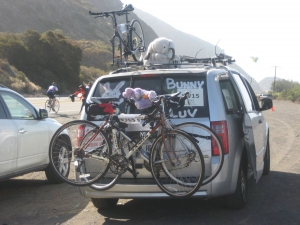 Another sweep vehicle. No doubt happy it's almost over! 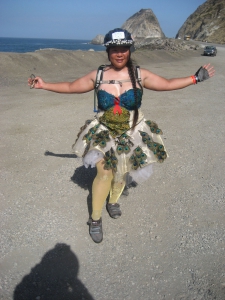 Partying it up with Mom, Dad, and Ginger in my cool outfit. 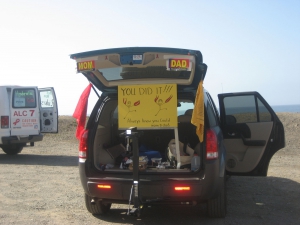 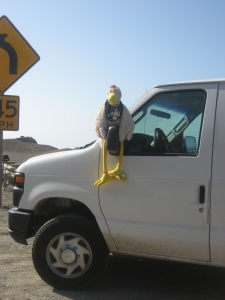 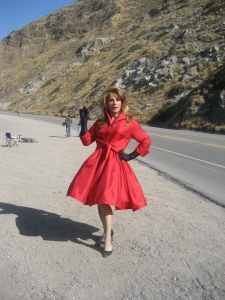 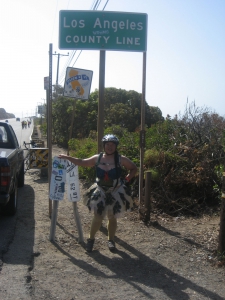 ...what a thrill went through me on seeing this sign: entering the county of Los Angeles! 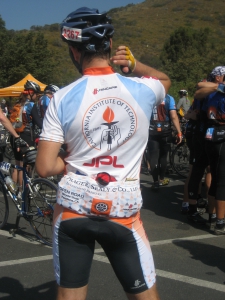 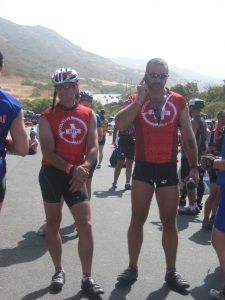 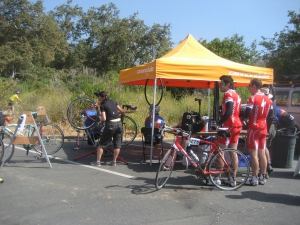 Bike Tech. These volunteers keep us on the road despite all sorts of mechanical problems. 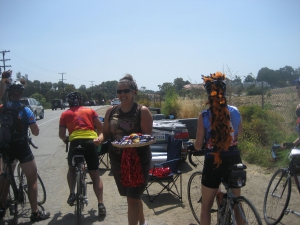 Supporters on the route, handing out candy. My, that Snickers bar was good!! 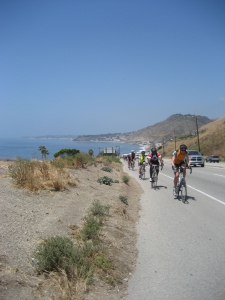 Riding along the coast in Malibu. One of the most beautiful, and also the most dangerous, stretches - narrow shoulder, lots of parked cars, traffic moving fast. 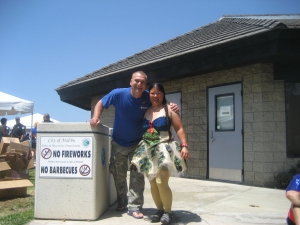 Chicken Lady (incognito) put in a surprise appearance at one of the rest stops, walking slowly (good to see him on his feet again after the stroke!). I was thrilled and wanted a photo. 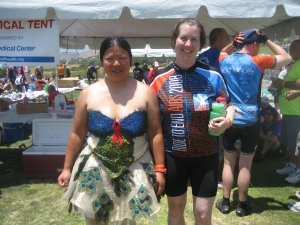 Me and Melissa, a rider I'd "sponsored" with some cycling gear. 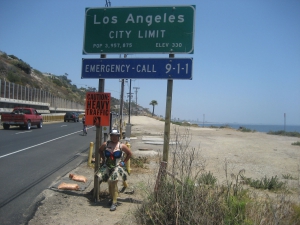 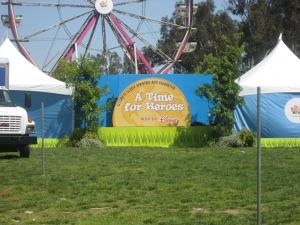 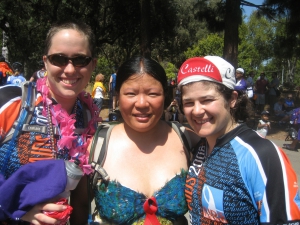 Me with Steffi, a ride friend. Note the thrilled grins of victory! 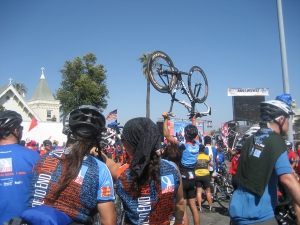 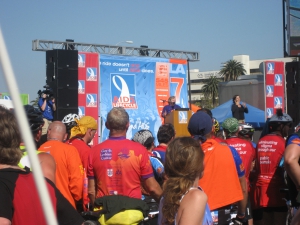 I had ridden every one of those 550 miles, looking fabulous all the way. I was (and am) quite proud!

But I'm even prouder of having raised $6600 for the San Francisco AIDS Foundation. This money will save lives. And it (and the ride itself!) would not have been possible without the generosity of my sponsors.