You are here: Home / Travels / Cambodia / The Ruins of Angkor

The Ruins of Angkor –an utterly amazing tour through the ruined temples of the Khmer Empire, including the famous Angkor Wat.

The ruins of Angkor contain 70 temples scattered over about 50 square miles, with the biggest group located in Angkor Thom, the capital city of the Khmer Empire. They were built over a 500-year period between 790 and 1307 C.E., by a succession of Khmer kings. The biggest and most impressive of the temples, Angkor Wat, was built by Suryavarman II around 1100. It measures 1.5 kilometers by 1.3 kilometers, and is a microcosm of the Hindu universe, a representation of Mount Meru.

Exploring the ruins definitely takes time and considerable stamina; Cambodia is bloody hot, even in the cool season, so bring suntan lotion, a hat, and plenty of water. It’s best to hire a guide; without someone to explain what you’re seeing, the ruins lose a lot of their flavor. A Cambodian guide will cost about $20/day, and a car and driver about the same. With four of us, this came out fairly cheap, $10/day. 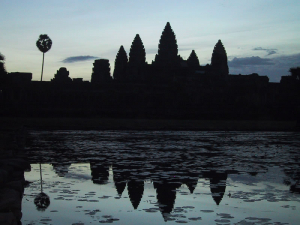 Angkor Wat is the world's largest religious monument, measuring one and a half kilometers by 1.3 kilometers (200 hectares). Built by the great Khmer emperor Suryavarman II, in the early 12th century (1113-1150), it symbolizes the entire Hindu universe: the moat represents the oceans surrounding the earth, the concentric galleries represent the mountain ranges surrounding Mount Meru, the home of the gods, and the five towers represent the five peaks of Mount Meru. 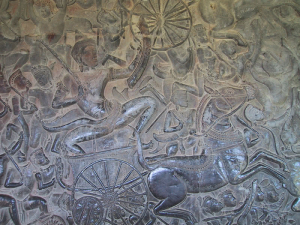 <p>From entrance to center, Angkor Wat consists of a moat, a main gate, a grassy field with two pools (the first two photos in this collection were taken from the north pool), a lower gallery running all around the main building, a middle gallery with four courtyard pools, and the five towers. The lower gallery is covered in bas-relief carvings to a height of six feet, covering over 600 yards of wall. They depict various religious and historical epics.</p> 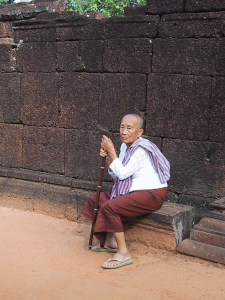 Warning, if you go to Siem Reap/Angkor: the area is teeming with beggars and touts, some of whom can be quite aggressive (not dangerous, but aggressive). Be careful about starting conversations with people, as they're likely to ask for money in one form or another. Also, prepare to be shocked...many of the beggars are landmine amputees, and many beggars are ragged children. Despite that, the people are surprisingly friendly. 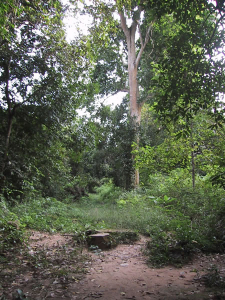 These are photos of people and places around the Angkor ruins, including some temples where I didn't take enough photos to justify separate pages. 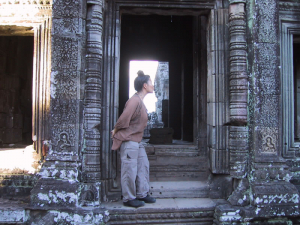 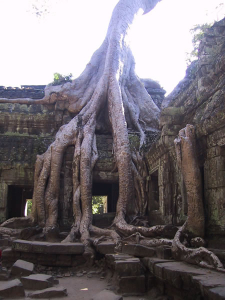 <p>Ta Prohm--where much of <i>Tomb Raider</i> was shot. This is an exquisite temple with many trees growing out of the ruins.</p><p>Ta Prohm was a monastery built by King Jayavarman VII, last of the great Angkor kings, to obtain merit for his mother. When restoration of the temples began, the French Ecole Francaise d'Extreme-Orient chose Ta Prohm to be left in its "natural" state, as an example of how most of Angkor looked in the early 19th century. (They did, however, clear away the jungle and the landmines.) As a result, Ta Prohm is full of giant banyan and silk-cotton trees growing up out of the ruins--some of them over 400 years old!</p> 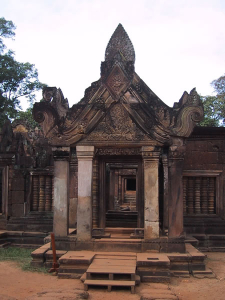 Banteay Srei, a small but intricately decorated temple about 20 km away from the main complex. One of my favorites.</p><p>Banteay Srei, built by one of Rajendravarman's counsellors in the late 900's, is unique among the temples of Angkor. It is built of pink sandstone (not the regular black-and-white sandstone used for the other temples), and features small, delicate temples full of exquisitely detailed carving. Because pink sandstone is harder than the regular sandstone, the carvings have weathered much better than at the other temples.</p> 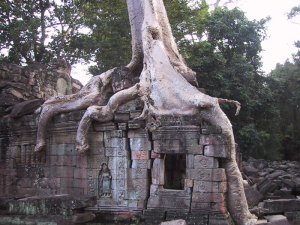 <p>Restoration work under way around the ruins.</p><p>Restoration of the Angkor ruins has been an ongoing project since the French "discovered" the site in the early 1800s. (I put it in quotations because Angkor Wat has been continuously used since its building, so was never forgotten in the first place--but many of the other ruins were.) Because Cambodia has little to no money to spare for such things, restoration of the monuments has been an international task, with teams from Japan, India, France, and many other nations.</p>