You are here: Home / Travels / Cambodia / The Ruins of Angkor / Angkor Wat

Angkor Wat is the world’s largest religious monument, measuring one and a half kilometers by 1.3 kilometers (200 hectares). Built by the great Khmer emperor Suryavarman II, in the early 12th century (1113-1150), it symbolizes the entire Hindu universe: the moat represents the oceans surrounding the earth, the concentric galleries represent the mountain ranges surrounding Mount Meru, the home of the gods, and the five towers represent the five peaks of Mount Meru.

Angkor Wat is also the only building to appear on a flag–the Cambodian flag features the triple towers of Angkor Wat, and every Cambodian government (or rebel group) has featured it on their version of the flag. Understandably–it’s quite impressive.

Photos don’t really do Angkor Wat justice, any more than Ansel Adams can prepare you for the sight of Yosemite’s Half-Dome; the scale just isn’t comprehensible from a single small picture. You have to stand there on the causeway, looking down the immense moat, and then at the enormous gates of Angkor, to truly appreciate its size.

The remarkable part about Angkor Wat is that despite its enormous size, virtually every inch of it is covered in detailed stonecarvings; so the scale goes from the gigantic to the very tiny. This is why it’s generally considered one of the Seven (surviving) Wonders of the world.

Despite its immensity, in my opinion Angkor Wat hasn’t got much ambiance; it’s hard to, with throngs of tourists overrunning it. I liked Ta Prohm and some of the remoter temples better. If you go, I would suggest going near the beginning or end of the tourist season, not near Christmas.

Because of the detailed scale, the thumbnails are almost unrecognizable; do look at the larger photos! 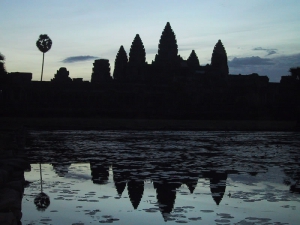 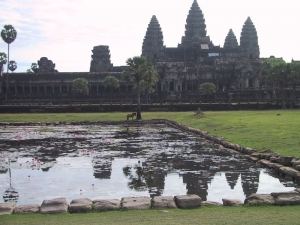 A horse (center) scratches itself on a palm tree near Angkor Wat. 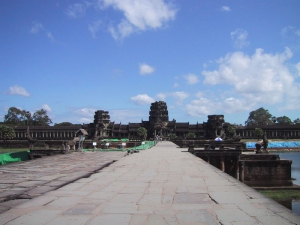 The causeway leading up to the main gate. To the left is the original causeway; to the right, a restoration. 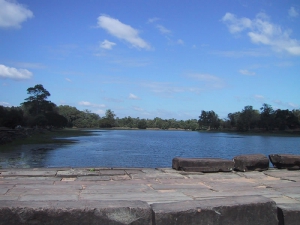 You would be forgiven for thinking this was a lake--it's 600 feet wide! But it's just the moat surrounding the main buildings. 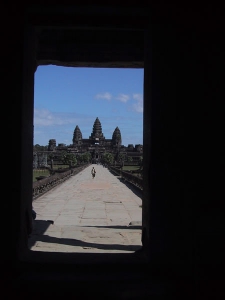 View from the main gate. The three ruined towers depicted above right are just the gate; the five main towers are inside the compound. 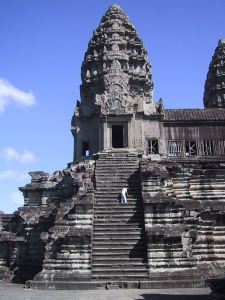 One of the five towers. Notice how steep the steps are--the "easy" steps have a fifty degree angle, and the others are substantially steeper. Going down the steps is quite an experience; fortunately, the south steps have a handrail installed. 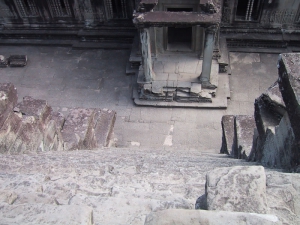 Looking down the steps. (Don't climb the tower if you get vertigo!) 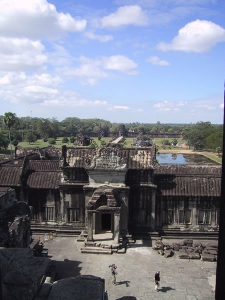 And the view from the tower. Here you can see one of the lower galleries, and the moat beyond. Angkor Wat has three levels, each with its own set of elaborately carved galleries. 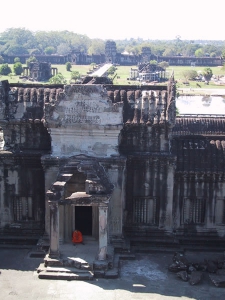 A monk sitting on one of the lower galleries. Angkor Wat (and the ruins generally) is still used for religious practice, though most of the shrine-tenders are nuns. 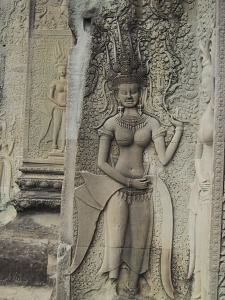 Two apsaras (heavenly maidens). There are over two thousand apsaras carved into the walls and pillars of Angkor Wat--and many more in the other temples. 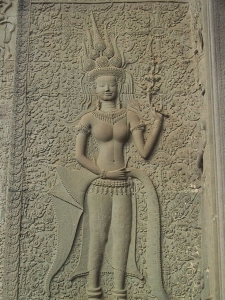 This apsara is smiling and showing her teeth--the only one of 2,000 apsaras in Angkor Wat to do so. Note the exquisite detail! Not bad for a work almost 1,000 years old. 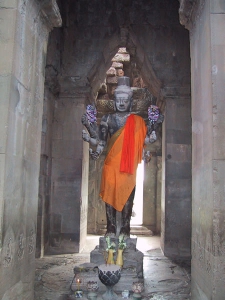 A statue of Vishnu, located to the right of the main entrance. It's generally believed that this statue originally stood in the central shrine of Angkor (there's a Buddha there now). Angkor Wat was originally built as a Hindu shrine, but has been rededicated many times depending on the dominant religion of the time. 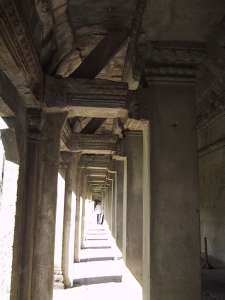 Rows of pillars by the bas-reliefs. If you take a closer look, you can see that the bracing cross-bars have been restored. This was done by an Indian team; restoration of the Angkor ruins has been a major international effort. 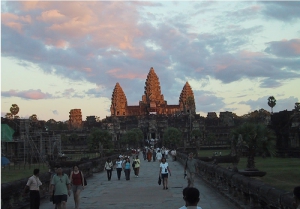 Angkor Wat at sunset. It's called "Golden Angkor" for a reason... 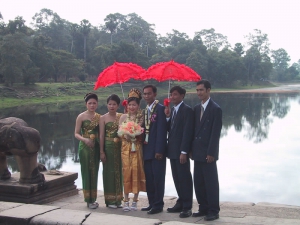 A Cambodian wedding party on the causeway to Angkor Wat.