You are here: Home / Travels / Cambodia / The Ruins of Angkor / Around the Ruins

These are photos of people and places around the Angkor ruins, including some temples where I didn’t take enough photos to justify separate pages.

Warning, if you go to Siem Reap/Angkor: the area is teeming with beggars and touts, some of whom can be quite aggressive (not dangerous, but aggressive). Be careful about starting conversations with people, as they’re likely to ask for money in one form or another. Also, prepare to be shocked…many of the beggars are landmine amputees, and many beggars are ragged children. Despite that, the people are surprisingly friendly. 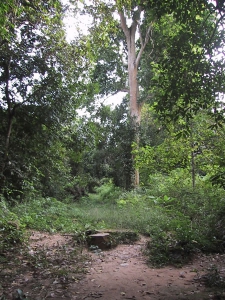 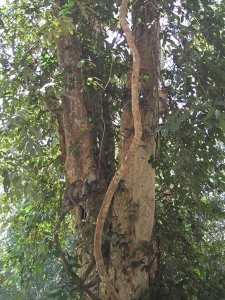 Three monkeys, sitting in a tree. 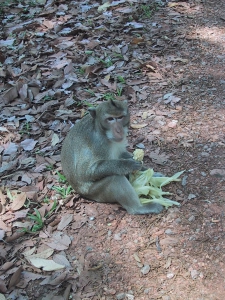 A monkey finishes off his lunch near Angkor Wat. 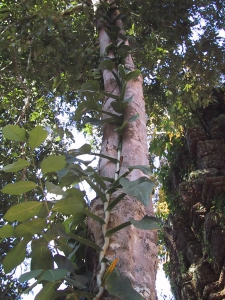 A creeper running up a tree near Ta Prohm. 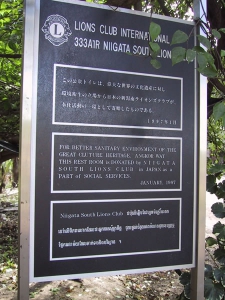 Sign near Angkor Wat. I cannot possibly express my gratitude to the Lions Club of Niigata South, Japan.... 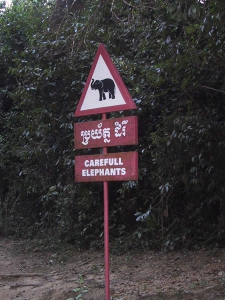 Sign near the bottom of Phnom Bakheng (the tallest hill in the Angkor area). Elephant rides are offered to the top, but upon seeing the pitiable state of the elephants (lots of scars), I declined. 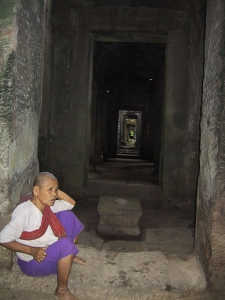 A nun in one of the doorways at Preah Khan. 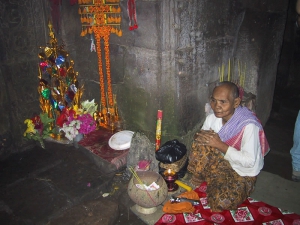 Buddhist nun in a Preah Khan shrine. The Angkor temples are still used for active worship; a temple may have from 1-20 shrines, depending on size. 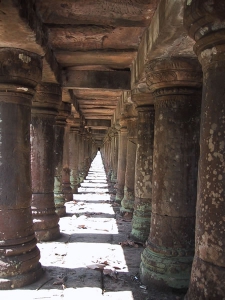 Columns under the causeway at the Bapuon (currently under restoration) 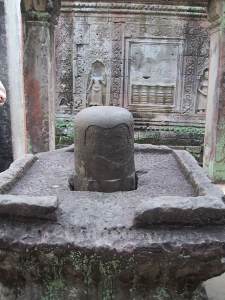 A lingam-yoni shrine at Preah Khan. The pillar is a lingam (phallic symbol), and the pedestal it rests in a yoni (female symbol). Water is poured over the lingam, which then runs out through the spout at front, producing holy water.

This lingam is in three sections, representing the three Hindu gods Shiva, Vishnu, and Brahma: the first section is round, the second octagonal, the third rectangular. I've forgotten which gods correspond to which section, though. 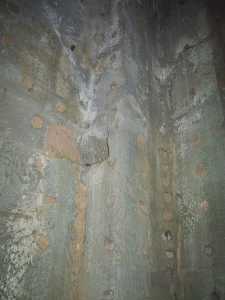 This is the interior of the central shrine at Preah Khan. Notice how the walls are riddled with holes: gold and diamond decorations once encrusted the walls, to reflect light coming in from above.

Most of the important shrines at Angkor are like that, too. One can only imagine the glories that must have been there, at the height of the Angkor Empire... 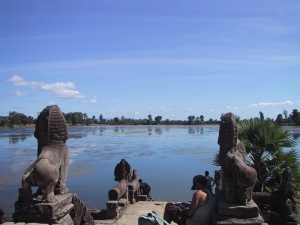 This is Srah Srang, called "the king's bath" in Angkor inscriptions. I hope they were joking: it's three-quarters of a kilometer (750m) by 350 meters, and was originally about ten feet deep. It was dug out by hand during the reign of Rajendravarman, in the mid-tenth century.

It's nice to be king! 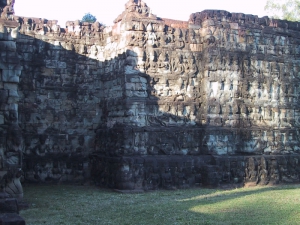 The Leper King Terrace, a mazelike structure with detailed carvings in the walls.

In the maze, I heard a piping, and tracked it to its source: a man with no legs, playing a pipe. Landmine victims are unfortunately extremely common in Cambodia; about 1 in 250 Cambodians has lost a limb to landmines, and there are still plenty left. 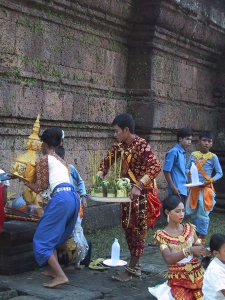 A Cambodian dancer prepares for a performance at the (ruined) Royal Palace in Angkor Thom. 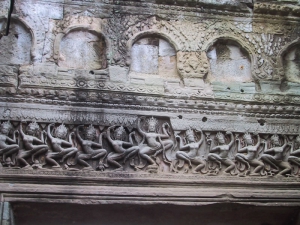 Apsaras dancing on a lintel at Preah Khan. 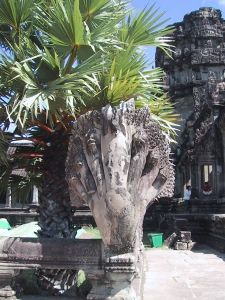 A naga in Angkor Wat. These are cobra-like serpents with five to nine heads, a major symbol in Hindu and Buddhist mythology. Buddha is often depicted under a naga with seven heads.

I'm jealous; my snakes have only one head apiece...

Two really cool trees growing out of the ruins in Preah Khan. 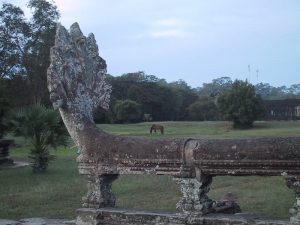 A horse/pony grazes in a field at Angkor Wat. In the foreground, a naga balustrade. 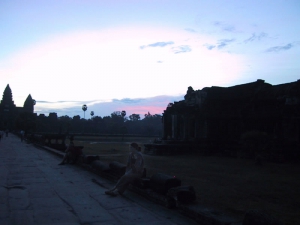 This picture deserves a closer look, so click on it: dawn at Angkor Wat.