You are here: Home / Travels / Cambodia / The Ruins of Angkor / Banteay Srei

Banteay Srei, a small but intricately decorated temple about 20 km away from the main complex. One of my favorites.

Banteay Srei, built by one of Rajendravarman’s counsellors in the late 900’s, is unique among the temples of Angkor. It is built of pink sandstone (not the regular black-and-white sandstone used for the other temples), and features small, delicate temples full of exquisitely detailed carving. Because pink sandstone is harder than the regular sandstone, the carvings have weathered much better than at the other temples.,

This temple is about 20 kilometers away from the Angkor Thom complex (which also contains Angkor Wat), but is well worth the trip–don’t miss it if you go to Angkor. Banteay Srei, together with Ta Prohm, were my two favorite temples in the trip. 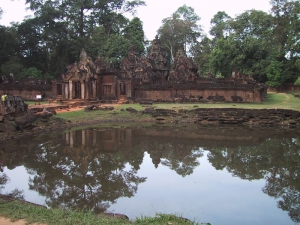 Banteay Srei from outside, across the moat. 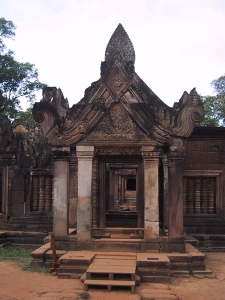 The entrance gopura. Notice the detailed carving and the lovely flourishes at the end. 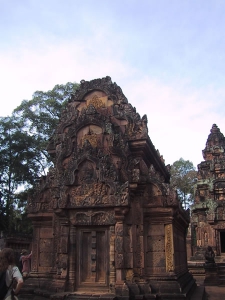 One of the interior buildings. Look at the closeups in the row below to get an idea of the detailed carving... 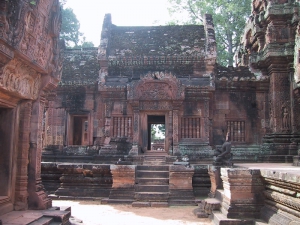 More of the complex. Looking at the building to the left, you can see how everything is elaborately carved... 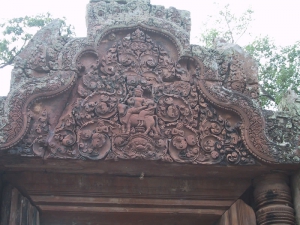 Shiva and his wife Uma, riding the bull Nandi. Notice the depths of the carving--much deeper than any of the other Angkor bas-reliefs, it's almost three-dimensional. 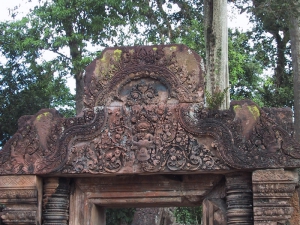 Vishnu, the Preserver of the Hindu Trinity, has ten incarnations. Shown here is his incarnation as the half-man, half-lion Narasimha, ripping out the chest of the king of the asuras (giants), who dared forbid the worship of Vishnu. 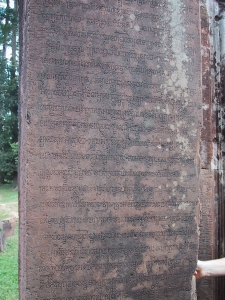 Inscription on a pillar in Banteay Srei. This is interesting because it was clearly drawn using a stencil, and also because it is still in place--most similar steles have either been stolen or removed for safekeeping. 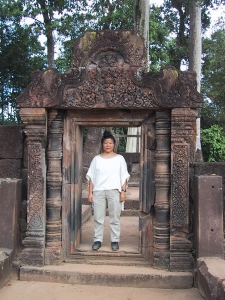 Me, framed in a doorway. 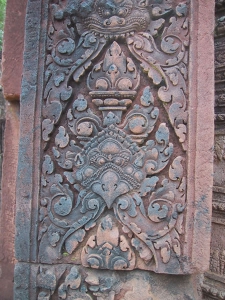 Detail of one of the door-lintels. The carving is exquisite, and almost untouched by time. Hard to believe it's over 1000 years old! 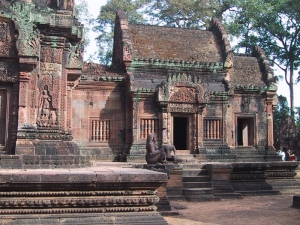 One of the side "libraries". 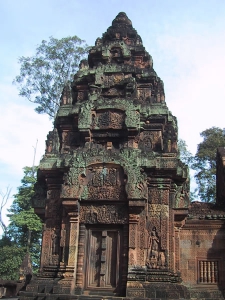 View up one of the towers, with moss and plants growing on it. 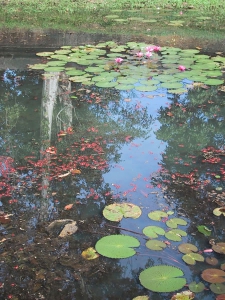 The pond by Banteay Srei. This is one of my favorite photos from the entire trip--so do look at the big version!