You are here: Home / Travels / Cambodia / The Ruins of Angkor / Restoration

Restoration of the Angkor ruins has been an ongoing project since the French “discovered” the site in the early 1800s. (I put it in quotations because Angkor Wat has been continuously used since its building, so was never forgotten in the first place–but many of the other ruins were.) Because Cambodia has little to no money to spare for such things, restoration of the monuments has been an international task, with teams from Japan, India, France, and many other nations.

Hazards to the monuments over the years have included religious differences (Jayavarman VIII destroyed many Buddha statues and had many Buddha images struck from the walls), historical revisionism (the Thai, during their occupation, removed all inscriptions referring to Thai as hired mercenaries), jungle overgrowth, and (most seriously) thieves. The Khmer Rouge defaced some Buddha statues during their reign of terror, but the remainder have been beheaded by thieves–even concrete replicas have had their heads removed! This is because, sadly, an authentic head sells for immense sums on the black market.

Lately, entire walls have been removed, as have pieces of apsaras and other work. For this reason, most of the small work and temple steles are housed in the National Museum at Phnom Penh–otherwise they, too, would be stolen.

Restoration is a painstaking process. For existing buildings, it means disassembling the building, carefully marking each stone and where it goes; then reinforcing the substructure, adding cement and replacements where necessary, and replacing the stones. As the stones are large and quite heavy, this can be quite a trick.

Restoration of the Bapuon was made significantly more complicated by the Khmer Rouge, who threw out the French archaeologists, tortured and killed all but two of the 1000 Cambodians working on the project, and destroyed all the site records. When the archaeologists returned, they found the world’s largest jigsaw puzzle, an archaeologist’s nightmare–thousands and thousands of carefully numbered stone blocks, with absolutely no record of how they went together. 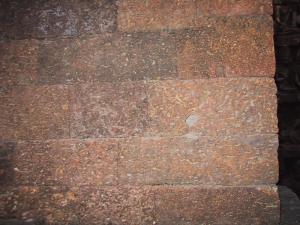 Angkor temples are constructed of two kinds of stone: laterite, pictured above, and the black-and-white sandstone seen in photos. Laterite is a volcanic rock which, being porous, is lighter than sandstone and also allows drainage. It was used for interior walls, sandstone was used outside.

Sandstone was quarried from the Kulen Mountains, 37 (?) kilometers away, and transported by elephant. 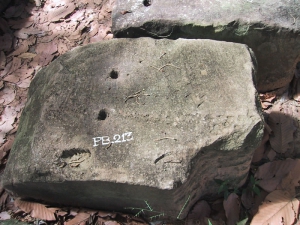 A sandstone building block from the Bapuon. Notice the number carefully inscribed on the stone.

The two holes in the block appear on every block in Angkor; they were drilled through the block and a bamboo pole thrust through, allowing the block to be transported by elephant. 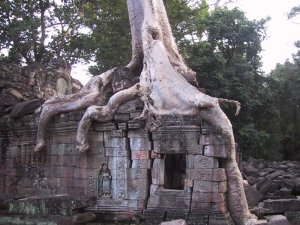 Tree roots, breaking apart the ruins. They will remain stable until the tree dies; then the building falls apart. 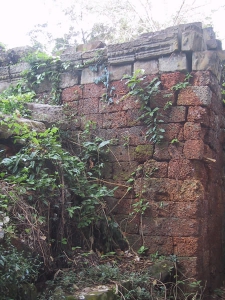 Plants growing between the bricks also contribute to degeneration.

The Thai removed many inscriptions from the walls, carving them out as holes. 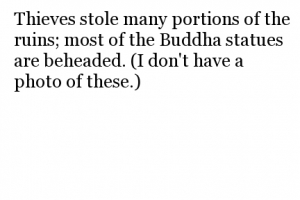 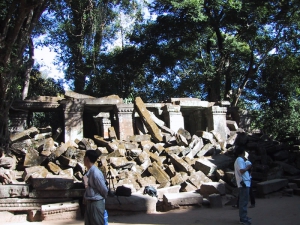 From Ta Prohm. Many of the ruins looked like this before restoration began. 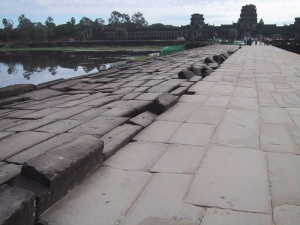 Causeway at Angkor Wat. On the left is the original sandstone; on the right, a restored modern version. 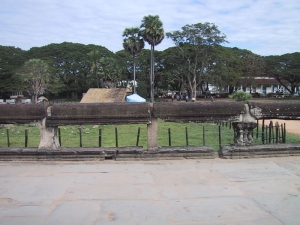 Balustrade at Angkor Wat. Look closely: there are three different supports for this section of balustrade. On the right, an original support (note the detailed carving!). In the center, a plain concrete post, and on the left, a fancier concrete post. Different groups have restored Angkor at different times, sometimes with slightly different styles. 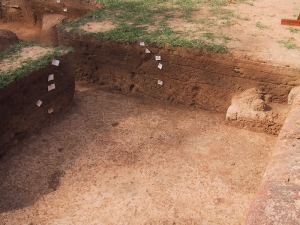 Pit 1284, excavated as part of a study on the history of the temple's construction period and of the French restoration effort in the 1930's. The white slips represent stratigraphic layers in the excavation. 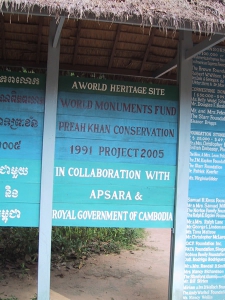 Restoring the monuments is a major international project. Teams from Japan, India, France, and many other nations are working to restore the ruins; here, the World Monuments Fund, a nonprofit organization, works to preserve and restore Preah Khan.