Dunhuang, about 300 miles southeast of Urumqi. It’s known primarily for the shifting sand dunes, and the Mogao Caves, a fantastic set of carved sandstone caves with elaborate paintings, murals, frescoes, bas-relief, statues, and other artwork dating between the 4th and 14th centuries A.D.

I also stopped by a silk rug-making factory, where the travelingtiger found some tiger-rug cousins.

Dunhuang, a small city in the Gansu province of China, is located about 300 miles southeast of Urumqi, and is known primarily for its sand dunes (one of the biggest “drifting sands” deserts in China) and for the Mogao caves. I unfortunately wasn’t able to take photos at the Mogao Caves, which are full of fantastically glorious, extremely well-preserved Buddhist frescoes, murals, bas-relief, paintings, and statues placed in “caves” (really rooms carved out of sandstone) over a period of roughly 1000 years, paid for by caravans seeking blessings before setting out on the dangerous Silk Road.

However, I did manage to take photos of the dunes, including some great shots of camels, and some photos from the local market. I also got photos of the rugmaking process, and the little travelingtiger found some silk cousins and insisted on a photo… 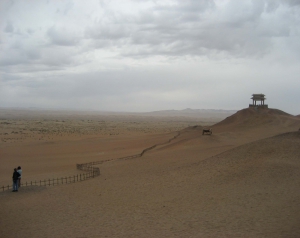 The "Singing Dunes", which are reputed to make a humming noise when the wind blows. 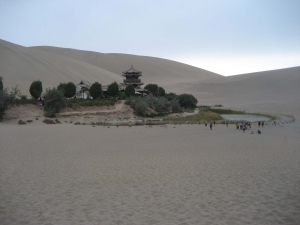 Crescent Moon Lake, a natural spring in the desert which has miraculously survived the shifting sands for thousands of years. 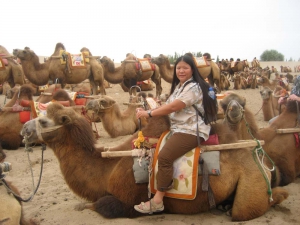 Me boarding a camel. You get on a camel kneeling, then hang on for dear life as the camel rocks slowly to its feet. 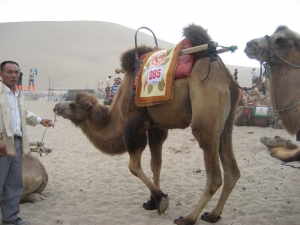 A camel sitting down. The top sways wildly up and down as the camel drops to its knees. You hang onto the inverted-U-shaped handle on the top of the saddle. 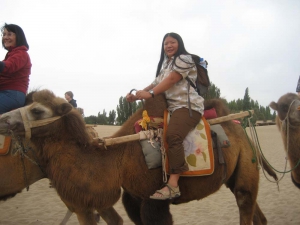 A successful camel mount. The fur on the hump is soft and hairy, a mix of soft down and coarse guard hairs. It feels nice! 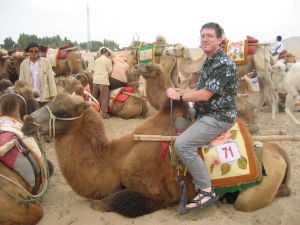 Mike on board a parked camel. 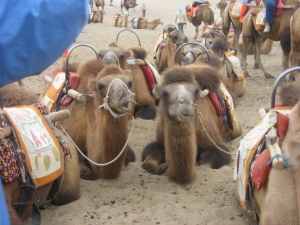 More parked camels. Notice how they all have pierced noses, with the bit run through the nose instead of the mouth. I don't think animal rights activists would think much of this habit, but it does seem to work for leading the camels. 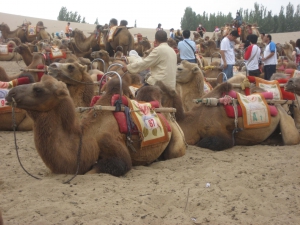 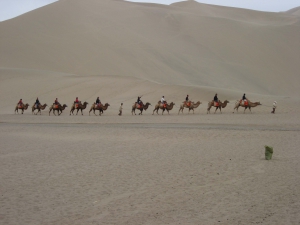 A string of camels headed off amongst the dunes. (All photos in this row courtesy Mike Magin.) 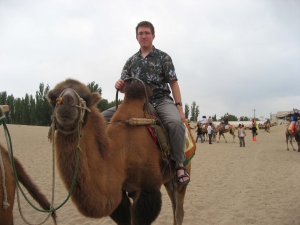 Mike on a camel. 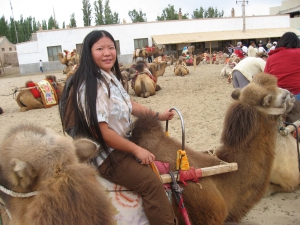 Me on a camel. (No, I am not obsessed with camels. Why do you ask?) 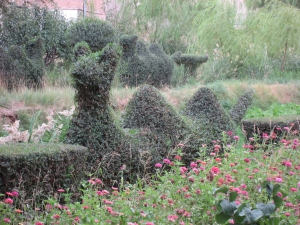 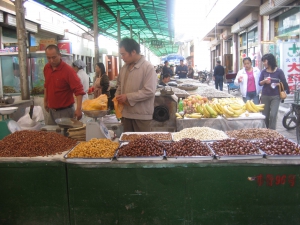 The market near Dunhuang. Here a man sells various types of dates. 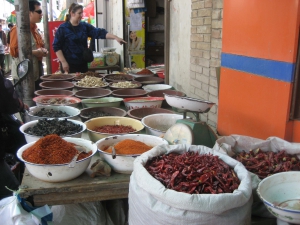 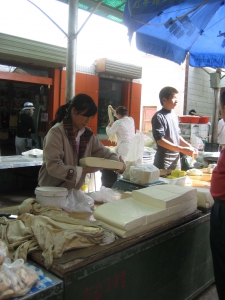 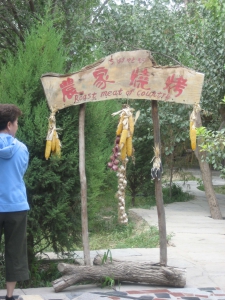 The restaurant where we ate lunch. The sign says, "Roast Meat of Country". 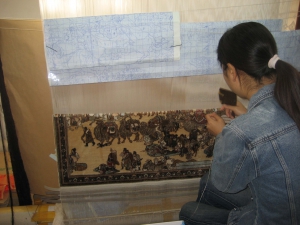 A woman making rugs in a silk-rug factory. This rug has 600 lines per foot, meaning about 2500 knots per square inch! 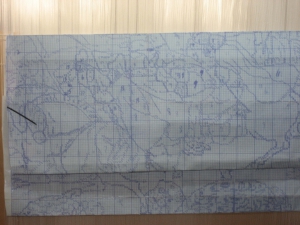 The cartoon that she works from to create the rug. 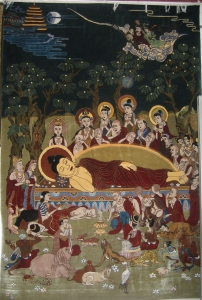 A silk rug depicting the Sleeping Buddha, made after the fashion of a painting in the Mogao Caves. 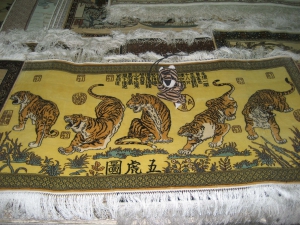 The travelingtiger found a tiger rug in the silk rug factory, and insisted on getting a photo with his cousins.