I spent a fair amount of time in Bangkok, and considered it my “home away from home” in Southeast Asia.  I found it endlessly fascinating–you never know what’s going to turn up around the corner. Elephants, tattoo artists working with a bamboo needle-holder and tiny cups of dye, street vendors selling fried grasshoppers and insects, or a thoroughly modern skyscraper with an embedded 7-11 store.

You can read more about my adventures in Bangkok in the Thailand section of my travel blog. 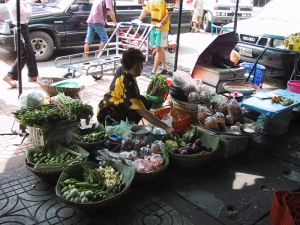 Bangkok market woman with her wares. 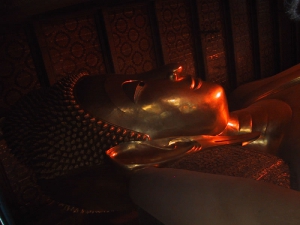 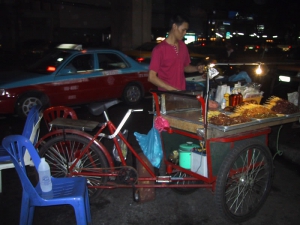 My favorite food stall in Bangkok. Very yummy pineapple-beef-chili skewers. Notice the bicycle at one end. 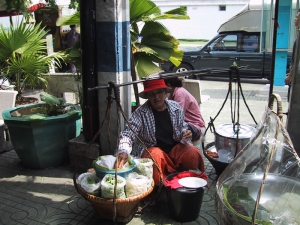 A soup vendor in Bangkok. When business slows, she just picks up the baskets and moves on. 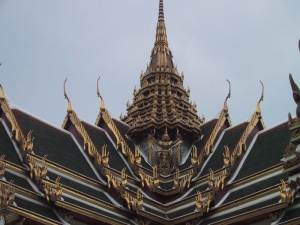 A gargoyle near the Grand Palace. 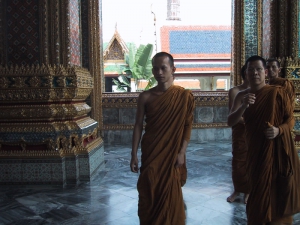 Buddhist monks in the Grand Palace. Most Thai men become monks for at least a brief period of their lives. 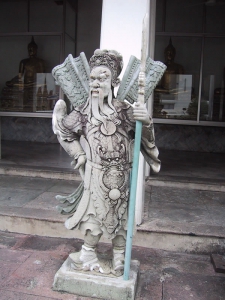 Statue in the Grand Palace. These are so detailed you can make out the embroidery patterns on their robes! 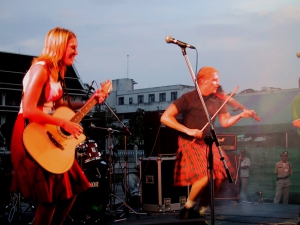 A Scottish-Irish-Canadian-Thai (!) band fiddles away at Ploenchit Fair, an annual charity event sponsored by the British Embassy. 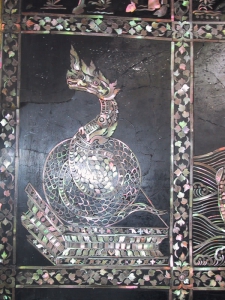 Detail from the feet of the Reclining Buddha (Grand Palace, Bangkok). The feet stand at least fifteen feet tall and are covered with 108 detailed mother-of-pearl images like this one. 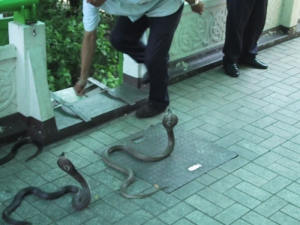 Siamese cobras at the Snake Farm. They breed 6 kinds of deadly snakes there to provide antivenin, supplying most of Southeast Asia. 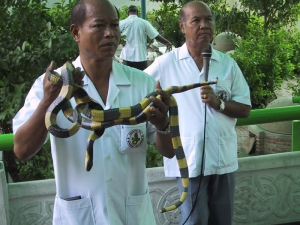 Blue kraits. The expression here clearly says, "Why am I holding two of the most venomous snakes in Asia?"

King cobra at the Snake Farm in Bangkok. I think king cobras are actually pretty cute. :-) 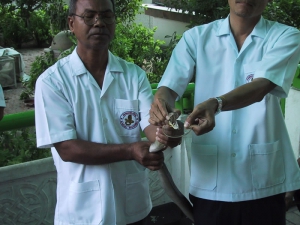 Milking a cobra for its venom. The venom itself looks like just a few drops of clear oil. 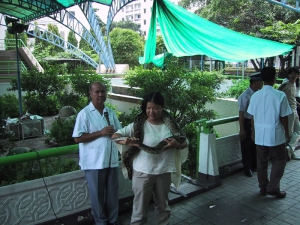 Me with a very lethargic Burmese python. 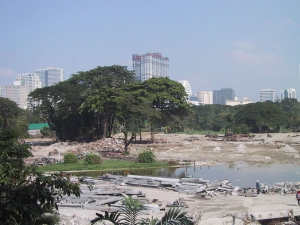