These photos are from my trip through Hanoi. One of the hotel clerks in Hanoi invited me to tour his family’s farm. So we got on a motorbike and off we went…70 kilometers up to his family’s lychee farm, near the Chinese border. 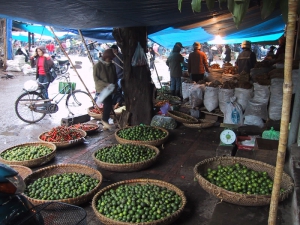 Market stall next to my hotel in Hanoi, which was in the Dong Xuan Market. 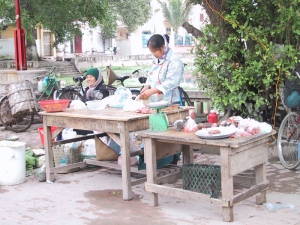 A butcher's stall in Hanoi. Yes, this is in fact how meat is sold: in fact, this is better than most. 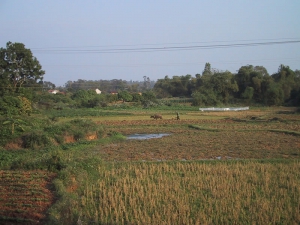 Man plowing with a water buffalo, outside Hanoi. (This photo needs cropping badly, but I didn't have time--sorry!) 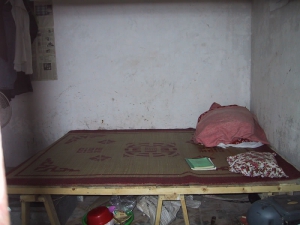 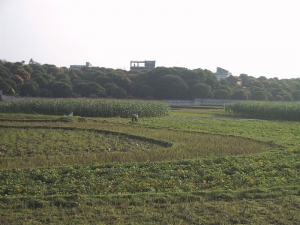 A view from his parents' farm. 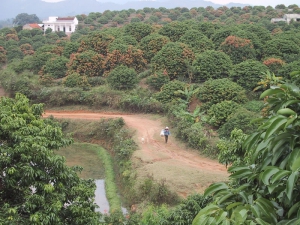 A worker comes up the dirt road. The green and red trees in the background are lychee trees. 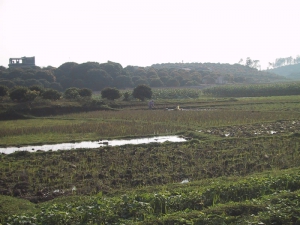 Rice fields near his family's farm. 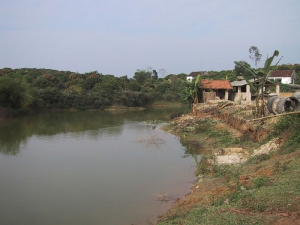 Nice view of a stream, near the toll gate... 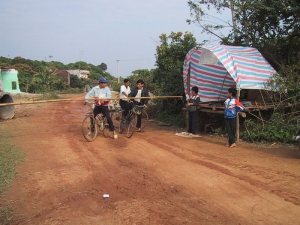 An impromptu toll gate set up at the entrance to the village. The bridge over the stream in the last photo had nearly washed out, so some village children were imposing a "toll" to raise funds. (See the kids on the right?)

Having seen the bridge, I was more than happy to contribute...I'm amazed it didn't dump us into the river, frankly. 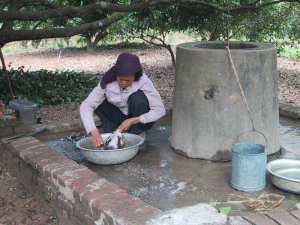 My guide's mother, plucking a chicken for our lunch. I was moderately surprised to find them slitting a chicken's throat over a bowl (the cooked blood later wound up on my plate, too), but the crowning touch was finding half a chicken head on my plate too--with beak and (closed) eyes. I didn't eat it, but I wonder now what it would have been like... 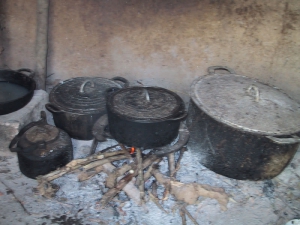 Wood fire for boiling the chicken. 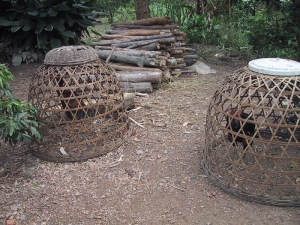 Big baskets where his father keeps fighting-cocks. These are almost ubiquitous in rural yards in Asia, where cockfighting is a major entertainment in the evenings. 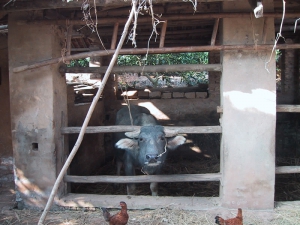 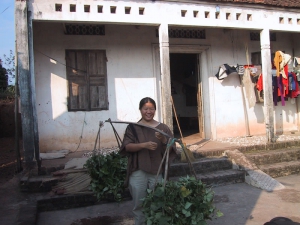 My guide's sister arrived with a full basket of morning-glory leaves, so I begged to try out the Vietnamese shoulder-sling. It's surprisingly stable, and very well-designed for carrying loads. 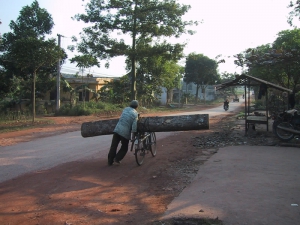 ...speaking of loads, this was another startling sight along the way. It's amazing what people transport on bicycles in Asia...