Random Photos from Vietnam. (Below, me in a cyclo.)

These photos were taken in various areas around Vietnam–the border. etc. 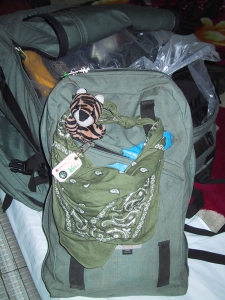 If you've wondered about the travelingtiger, wonder no more. Here is the Traveling Tiger, a small stuffed tiger Jim gave me the night before I left. He's been all over Asia, including Angkor Wat....peeking out from the back of my daypack. (He's tethered there by some rubber bands, or I'm sure he'd take off on his own...you know what tigers are like, once they get to traveling. ;-) )

Carolyn, while the main pack is mostly clean, the daypack is acquiring more than enough dirt and scuffs to make up for it... 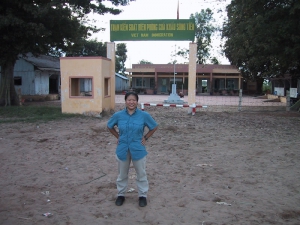 Me at the Vietnamese border.

The Mekong River, at the border station 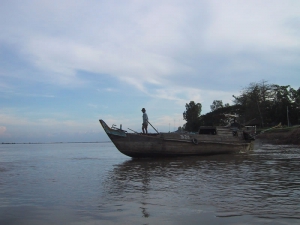 Boatman at the border

Harvesting on a small farm near the border 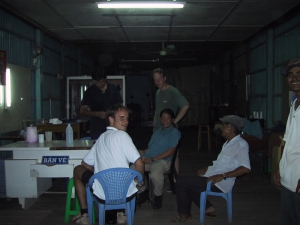 Me and two German boys at a "bus station" near the border. We've just discovered that the "four hour trip" is going to be 13 hours over awful roads. Welcome to Third World travel! 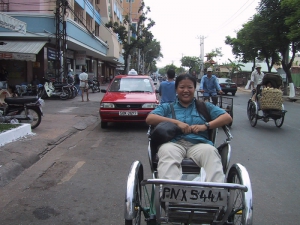 Me in a cyclo, in Saigon. 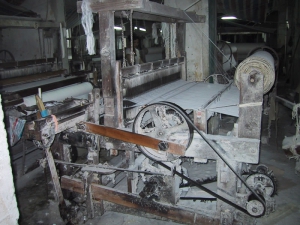 A Vietnamese loom. This is where your fine silk satin, cheap cotton batiste, etc. come from. Not a "modern" factory!

A lone water hyacinth growing amidst trash on the Mekong. Ho Chi Minh City (aka Saigon). 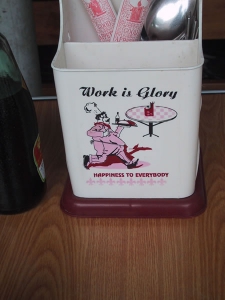 A silverware container from a restaurant on the central coast.

A fairly typical billboard in Vietnam. Note the solidarity worker types and the hammer and sickle flag, although the official sign of Vietnam these days is a yellow star on red background. 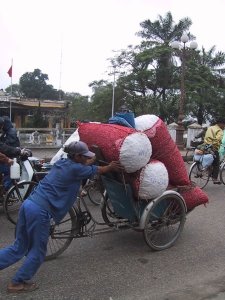 It's astonishing, the things that get moved by cyclo. Here the driver is pushing the cyclo to get it started over the bridge; a few seconds later, he got on and pedaled off. 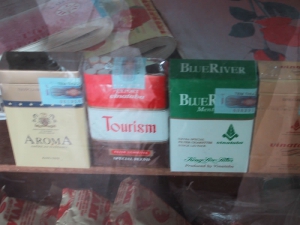 Look closely at this photo. Yes, Silicon Valley is everywhere...(Saigon, by the river) 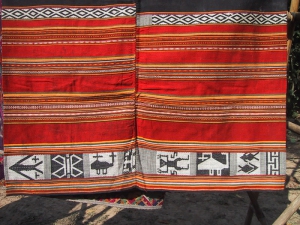 A Black Hmong skirt from Laos. Note the helicopters, etc. in the hem!