You are here: Home / Travels / Cambodia / The Ruins of Angkor / Ta Prohm

If you’re up on modern movies, you’ll recognize Ta Prohm: it’s where Tomb Raider takes place. (Actually, Tomb Raider was shot all over the Angkor ruins; I have no idea how they kept Angelina Jolie from getting heatstroke. It’s bloody hot out here!)

Ta Prohm was a monastery built by King Jayavarman VII, last of the great Angkor kings, to obtain merit for his mother. When restoration of the temples began, the French Ecole Francaise d’Extreme-Orient chose Ta Prohm to be left in its “natural” state, as an example of how most of Angkor looked in the early 19th century. (They did, however, clear away the jungle and the landmines.) As a result, Ta Prohm is full of giant banyan and silk-cotton trees growing up out of the ruins–some of them over 400 years old!

Ta Prohm, with Banteay Srei (delicate pink sandstone carvings), is my favorite of the Angkor temples. The giant trees and mosses give it a pleasantly ruined/romantic atmosphere, and because it’s a little further out than Angkor Wat, it’s not quite as overrun with tourists. 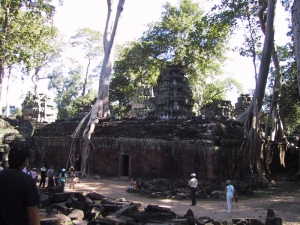 Ta Prohm, from the outside. 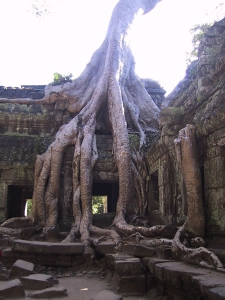 These trees start out as seedlings that take root in cracks in the roof. The roots grow down and around the temple, stabilizing the rocks until the tree dies...then the section collapses. Thus, over a period of centuries, trees slowly pull down the temple. 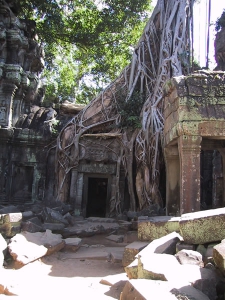 This door appears in Tomb Raider, or so I'm told... 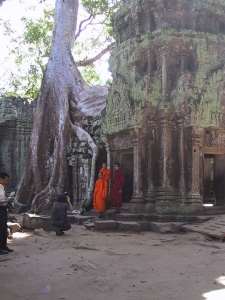 Monks being photographed in the courtyard of Ta Prohm. 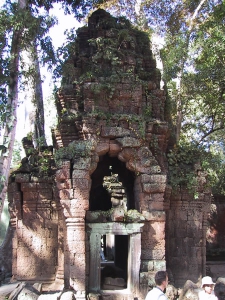 Take a closer look; this ruined tower is overgrown with plants, and is quite pretty. 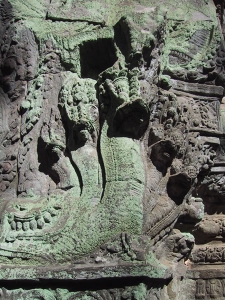 Ta Prohm is full of beautiful carvings, like this naga; but as the trees are distinctive, I mostly just took photos of the trees. 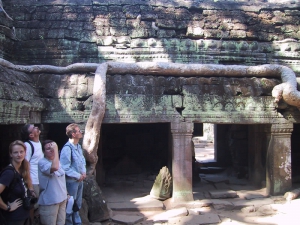 Our tour group, gaping at the trees. 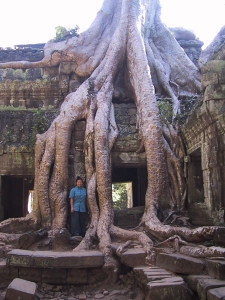 Tiger in a tree? 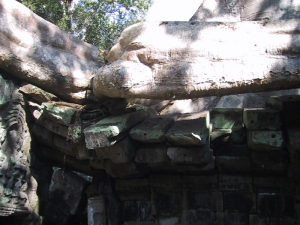 Notice how this root is buckling the stones. When the tree dies and the root rots away, the stones will collapse--or would, if they hadn't been invisibly stabilized by conservators. 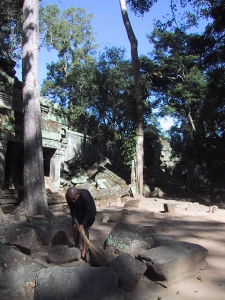 This old man has swept the courtyard of Ta Prohm every day for over ten years, as part of his devotional duties. Angkor is still very much an active temple, full of Buddhist and Hindu shrines where one may pay respects or give offerings. Many people come to pilgrimage here. 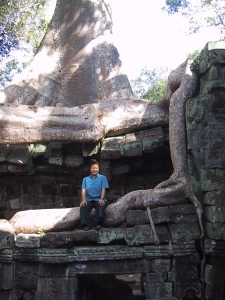 Me communing with tree roots. 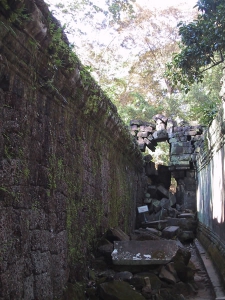 This rates a closer look; the wall at the end is collapsing. (The sign says "Danger! No Entry"--as if the teetering stones weren't enough!)